Where a boy is born and a city awaits

a vision of milan

T he dawn of our story rises on an ever changing, restless and hopelessly optimistic city. Behold Milan at the beginning of the twentieth century: a timeless promise of a brighter future, a locomotive launched full steam ahead towards better tomorrows. A mostly incongruous claque of artists, designers, revolutionaries daring to rewrite the rules of visual arts never bothering to ask anyone’s permission.
“I will never forget the excitement I felt as a boy on a summer morning by the lake, when for the first time, my pen started to trace the outline of a leg, then the body, then a face. I was amazed, ecstatic and appreciative of this miracle, and I am still always amazed that the blossoming of this image that I have inside of me happens again and emerges on paper all by itself…” - Piero Fornasetti
Milan 1913

O n a very ordinary 10th of November of the year 1913, Piero Fornasetti is born. In his future his father sees numbers and businesses: a fitting life for the firstborn of a rich bourgeois family. Throughout the years, though, the boy’s head fills with mysterious visions that he relentlessly draws on his notebooks: an impressive kaleidoscope of worlds conjured by his impossible imagination. These epiphanies build a different path in front of young Fornasetti: no matter what, he will become an artist.
Brera
Academy

The Miseducation of Piero

Where Piero loses his way and finds it again 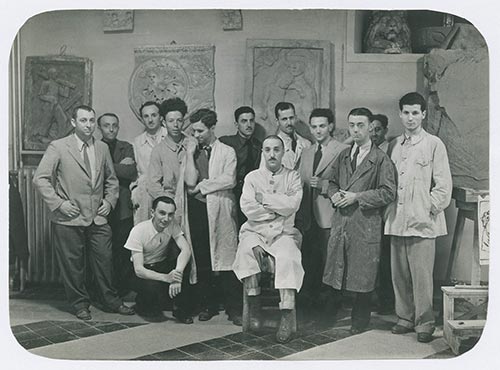 Accademia di Brera
The Brera Academy debacle only strengthens Fornasetti’s ambitions. He enrolls at the Night School of Applied Arts at Castello Sforzesco, but it’s his own personal research that truly feeds and inspires his creative endeavors. A mind forever voyaging, Fornasetti spends his days diving into magazines and books on all fields of arts and science.

M uch against his father’s will young Fornasetti becomes a student at Milan’s Brera Academy, one of the most renowned art schools in Italy. Although young, Fornasetti’s self-taught approach and eclectic mindset makes for an uncompromising character that eventually clashes with the academic limits of the traditional institution. He is shocked to discover that he won’t be learning what he considers the centerpiece of an artist’s education: the study of the nude. He vocally protests the approach and finally and inevitably leaves the Academy in 1932.
“Nobody in the workshops where I went could teach me. I learned from books, lithography and etching, all this before the founding of specializing schools.” - Piero Fornasetti 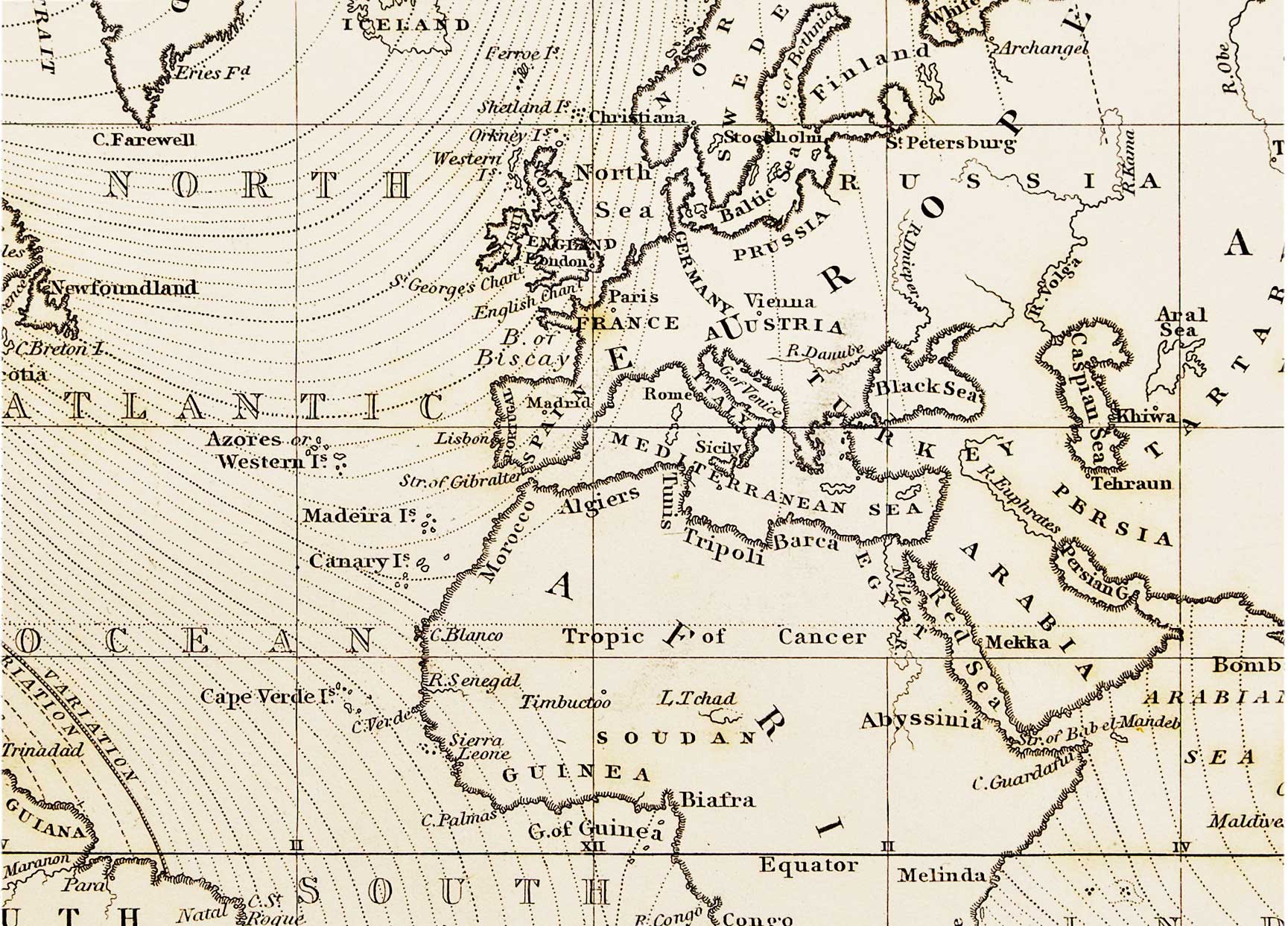 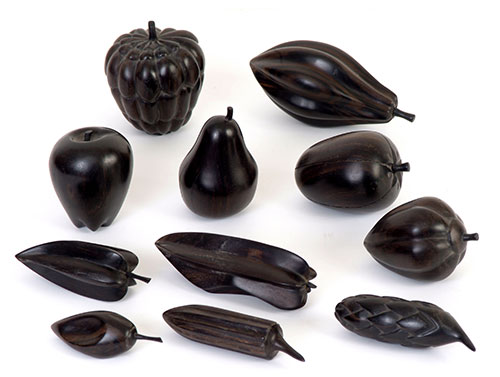 Academic Driftings
In the same period he embarks on a long and inspiring journey across Italy and Africa. The limits of his imagination expand uncontrollably, worlds within worlds of images that collide in his head to shape unique designs. 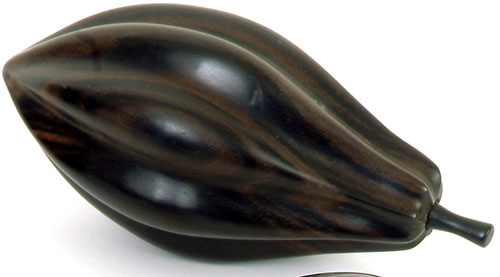 The Artist at War

A s Europe is on the verge of World War Two, Fornasetti returns to Italy with renewed strength and motivation, ready to present his designs to the world. Fornasetti dives, deeper than ever, in his visually arresting world, matching his surreal designs with concrete and basic objects: the results are extraordinary and the turning point comes with his brand new printed silk scarves collection. The original designs catch the attention of Gio Ponti, one of the driving forces behind Italy’s new design scene.
In the forties Fornasetti’s scope of work expands unpredictably: his relationship with Gio Ponti becomes almost symbiotic and together, the two artists develop a number of projects destined to leave a mark on the international scene. The silk scarves are just the starting point of this golden age: the almanacs, imbued with surrealism and metaphysics, the Architettura Trumeau, universally considered one of the masterpieces of Fornasetti, the covers of DOMUS.
The Stanza
Metafisica 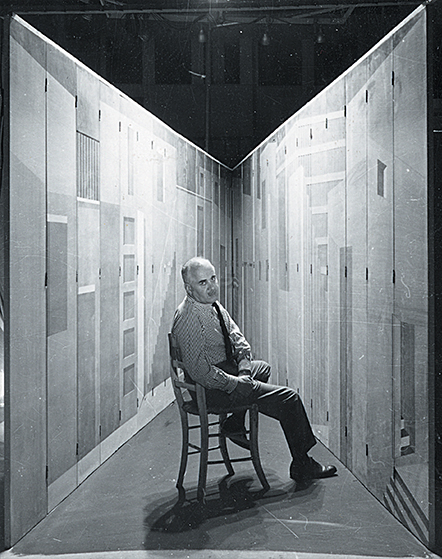 The Stanza Metafisica
The masterpiece that stands the proof of time as one of the most unique and mind-bending products of Fornasetti’s imagination is the Stanza Metafisica. Made of 32 panels, each 3 meters high and 50 centimeters wide, the Stanza is a modular wooden screen decorated with imaginary architectures and unreal landscapes. A thought-provoking monument to Practical Madness, an awe-inspiring effort, four years in the making, aimed at creating a place to meditate and forget the struggles of modern life.

the Variations of Lina

Where a mysterious woman lives a thousand lives

O n his endless trips through old magazines and books, Fornasetti stumbles upon the round and mesmerizing visage of Lina Cavalieri, fin-de-siècle opera singer. Her oddly inexpressive stare and flawless complexion bewitch him. He starts painting her face in 1952 and never stops.
back

W hat starts as a single plate ends up being a series of more than 350 pieces, not one of them the same as the other. Dancing together in the miraculous Fornasetti Atelier, he redraws Lina’s identity hundreds of times, transforming her into an animal, a thief, an Arab princess, a mask, a man.
back
Lina
for Piero
Piero
for Lina
The Bibliofili
Gallery 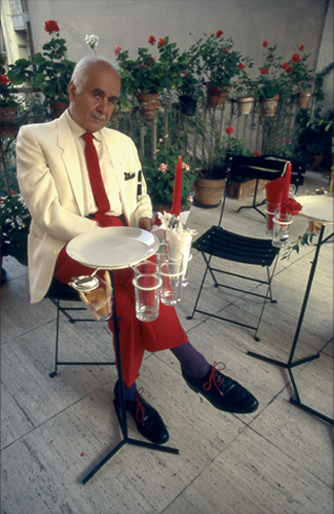 The Bibliofili
The founding of the Galleria dei Bibliofili, that Fornasetti brings to life in 1970 with a group of close friends and like-minded artists and thinkers, is his ultimate act of resiliance. Almost forty years his refusal of the rules of Brera Academy, Fornasetti is once again fighting the establishment in the name of his unique vision. 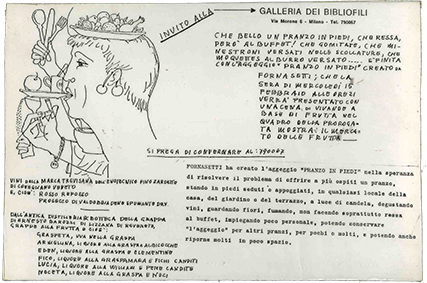 T he Sixties see the triumph of a new, radical dogma. Rationalism, with its arithmetic beating heart, changes the face of applied arts: form is enslaved by function and decor, so dear to our hero, is regarded as a futile accessory. In the face of change, Fornasetti’s rebellious spirit refuses this new setting with the ultimate act of resilience: in 1970, with a group of close friends and like-minded artists and thinkers, he founds the Galleria dei Bibliofili, an exhibition venue and a home for the non-aligned people where his practical madness can fit.
In 1950, a truly life-changing event hits Fornasetti’s life: Barnaba Fornasetti, his only child, is born. In his veins flows the same rebellious, ever curious and unconventionally creative blood of his father.
BARNABA
FORNASETTI

a Spotlight   and a Curtain

Where Fornasetti takes a final bow on the world's stage 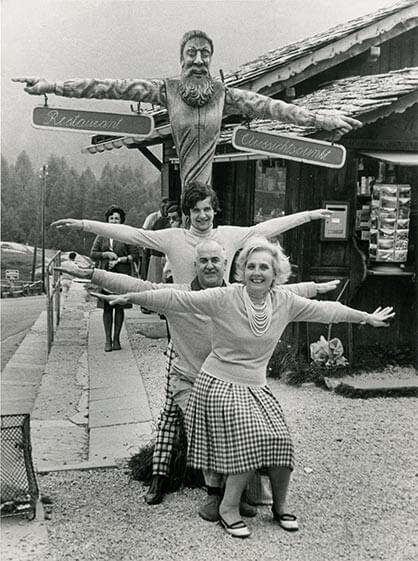 Barnaba Fornasetti
Although the world he grows up in is very different from his father’s, his life follows a surprisingly similar evolution. In the Seventies, while studying in Brera like his father before him, Barnaba joins the student’s protests rooted in those years’ counter culture and is arrested during a demonstration. 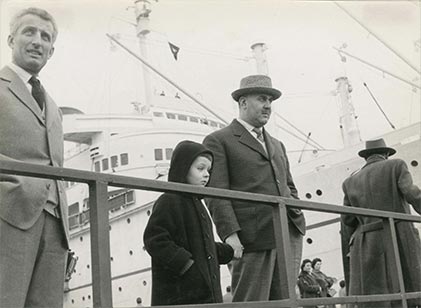 I n the Eighties, Fornasetti struggles for relevance and the Atelier faces economical issues. For the first time practicality is getting in the way of madness, but when the night is darker, the world turns its head towards him. A very peculiar gallery, by the name of “Themes and Variations”, opens in London, where Fornasetti’s unique production shines with a bright new light in the eyes of British connoisseurs. In these years, Barnaba joins his father in the Atelir: it is the first step towards the rebirth of Fornasetti and a brighter future.
A fter the triumph of “Themes and Variations”, the man who tried to walk away from the world finds himself under the worlds’ attention. But time is an unmerciful agent: on the verge of global recognition, Piero Fornasetti dies in 1988 for a banal surgery. The most uncommon man leaves this world just like he lived, in the most common way. Called by history to inherit the vision of his father, Barnaba becomes the champion of the Fornasetti world, master of keys and guardian of a fifty-year collection. A true visionary and artist himself he will reshape and rebuild the legacy of his father.

Where Fornasetti finds a new voice for contemporary ears

T he culmination of this rebirth takes place in 1992, when the Victoria and Albert Museum hosts the first posthumous international exhibition of Fornasetti. A compendium of more than half a century of works, collecting the most diverse and heterogeneous collection of Fornasetti ever assembled: from plates to scarves, from furniture to early paintings, from fashion pieces to chairs and lamps. Fornasetti is presented as a “designer of dreams” - dreams that the whole world can now share.

And Madness For All

L ike his father before him, Barnaba meshes successfully a true artistic vision with a traditional and deep-rooted artisan’s approach. In his father’s gargantuan archive he discovers and gives order to a virtually endless source of inspiration and material. In 1996, his meticulous and relentless work delivers the first result: in Via Manzoni, at the heart of Milan’s most prestigious neighborhood, a spectacular new Fornasetti showroom opens. It marks the beginning of new partnerships and new projects with globally acclaimed artists like Philippe Stark and Nigel Coates.
Triennale Design
Museum 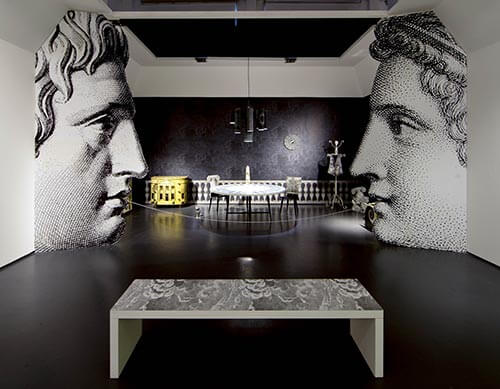 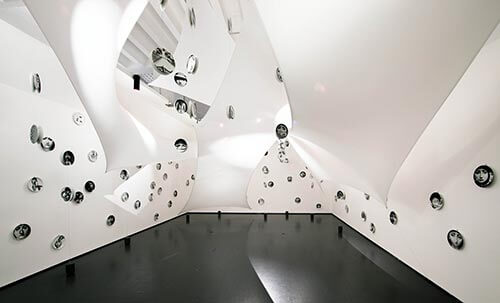 P ushed by the creative force of Barnaba, the Atelier is today a dream factory that has redefined its processes. Every single item that comes out of it is painstakingly hand-crafted by skilled craftsmen and maestros: no two pieces are ever the same. In 2013, exactly 100 years after Piero Fornasetti was born, Barnaba oversees the most complete and ambitious exhibition of Fornasetti ever. Over one thousand pieces collected at the Triennale Design Museum in Milan, summing up “100 years of Practical Madness” 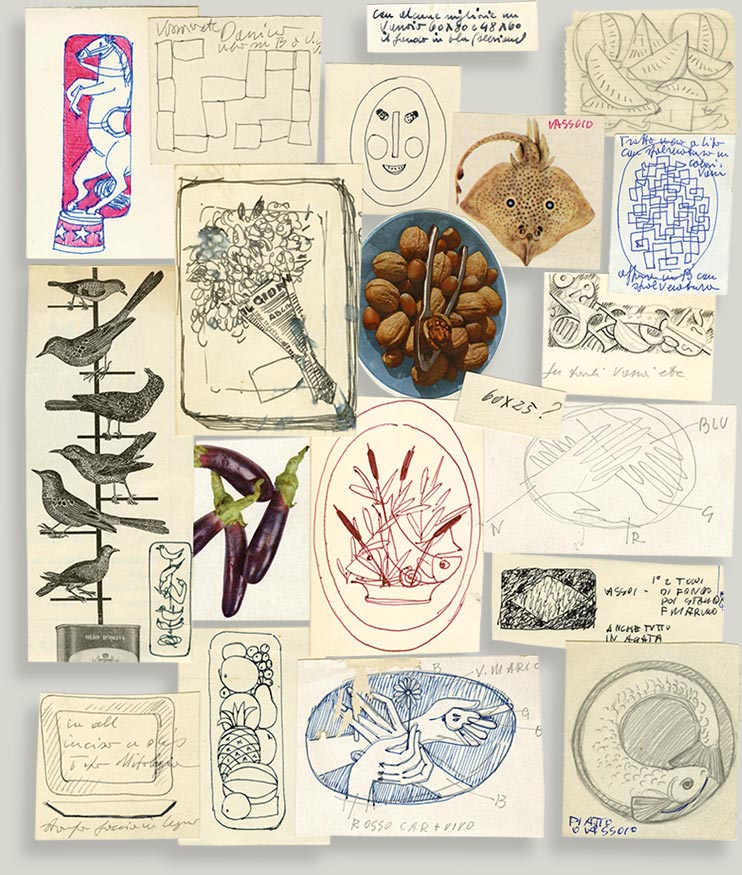 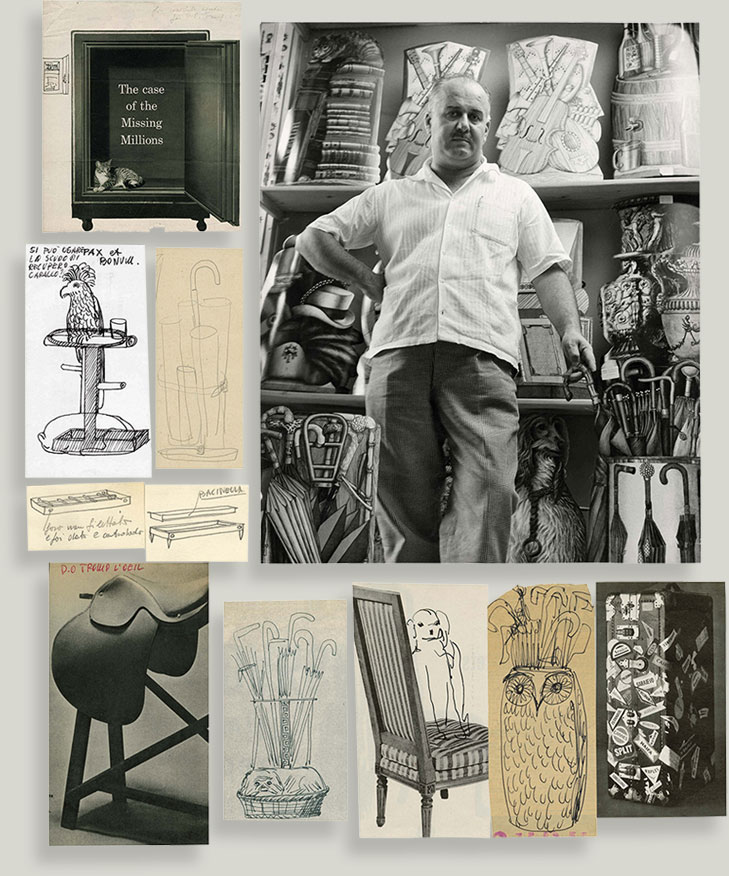 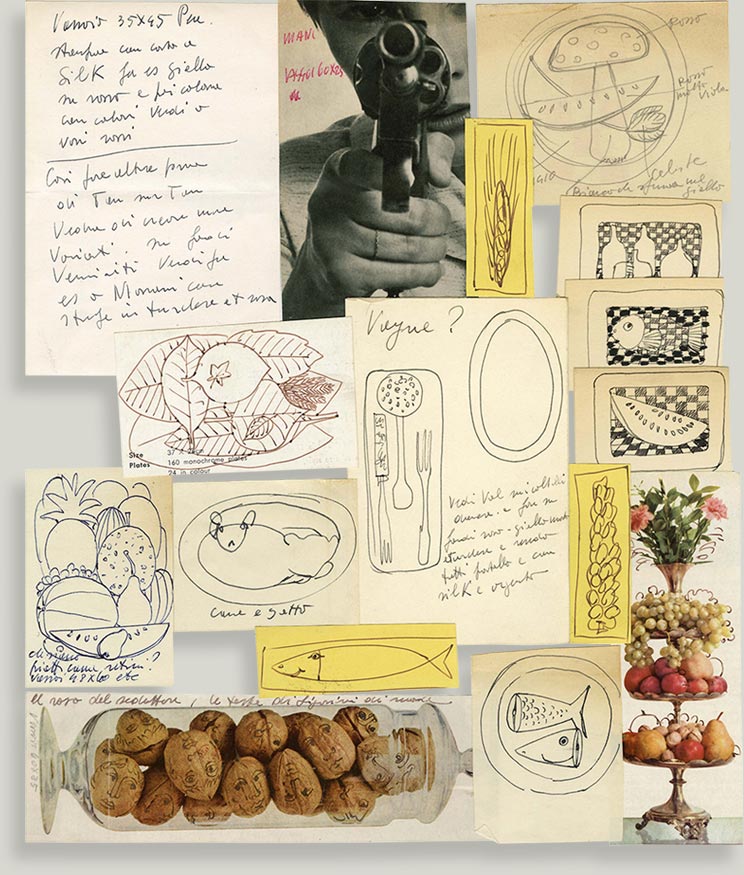 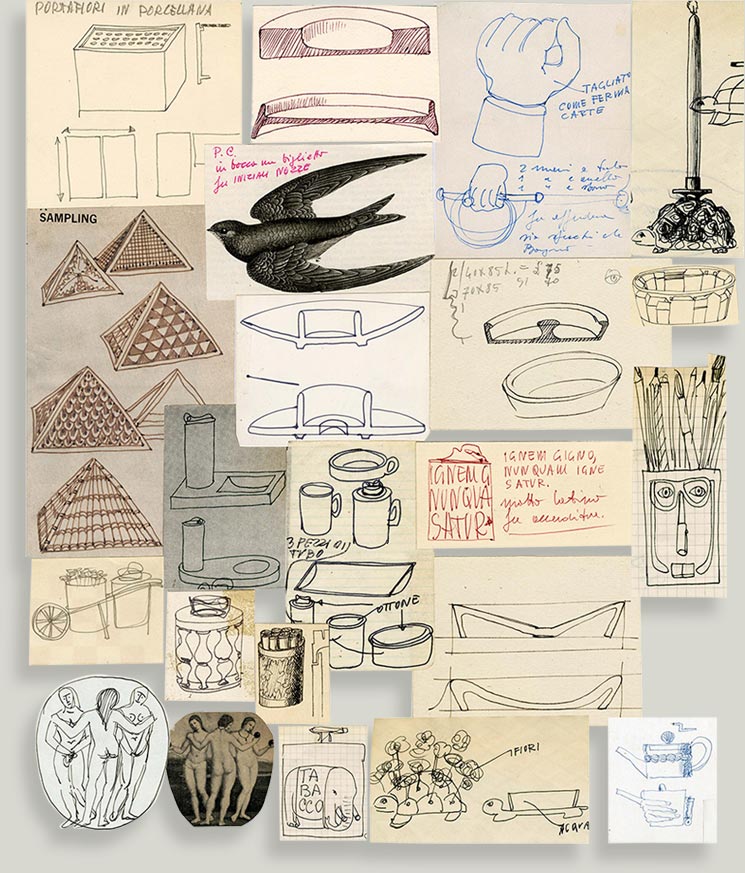 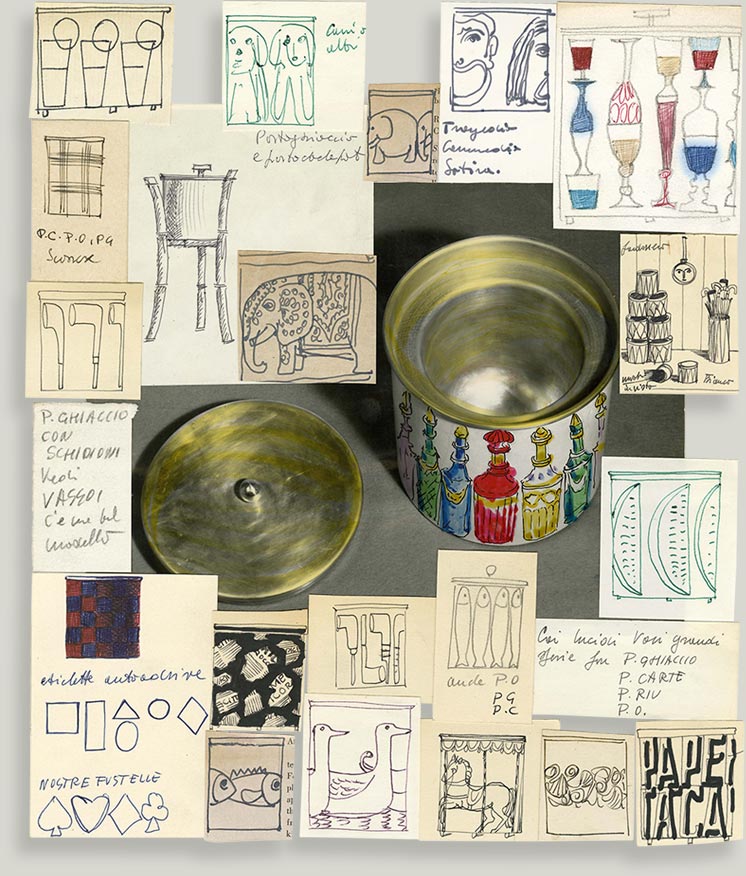